Carrying the Billionaire's Baby is the first in my new Manhattan Babies Series. 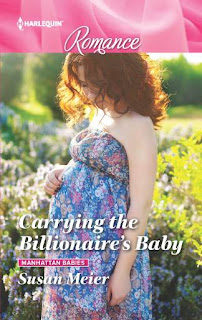 Jake and Avery are as different as night and day. The only place they're compatible is in bed. What started out as a one-night stand became a fling...and a baby. Avery's happy, as long as Jake stays and arm-length away. Jake is shocked, and the last thing he wants is to stay away. He wants Avery and the Baby on his terms. But Avery's not like any other woman he's met.